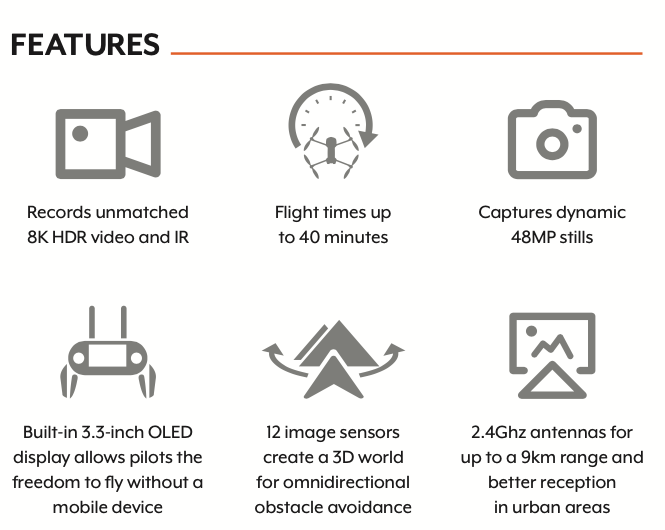 EVO II Dual transmits the most crucial information back to the pilot and allows for Live Deck backward compatibility so your team can make informed decisions in the most stressful of circumstances. From case to air in under 30 seconds with no flight restrictions, no forced updates, and no-repeat calibrations, first responders can make every second count.

Several features of EVO II Dual makes it an excellent tool for investigators who build their cases based on accuracy. With the ability to produce 8K 24fps RGB video and up to 640x512 30Hz thermal recording, investigators can view and capture a 360-degree view of the site on EVO II Dual’s remote controller.

In the industry of engineers, contractors, and project managers, it’s essential that your drone works as hard as you do and can capture even the smallest details in real-time. Features such as EVO II Dual’s Picture in Picture Mode can record up to 1080p at 30fps and overlays thermal imaging to standard RGB footage, allowing the pilot to view both simultaneously.

Designed with portability and reliability in mind, EVO II Dual is the tool that gets the job done. Complete with a high-resolution 8K sensor and thermal imaging up to 640x512 made possible with the FLIR Bosson sensor, EVO II Dual relays the most critical information back to the pilot. With features including Visible Light mode and Picture in Video, first responders, contractors, and business owners now operate efficiently, safely, and are more effective.

Included with EVO II Pro is a smart controller featuring a built-in 3.3- inch OLED display, eliminating the need for a mobile device. With four-hour battery life and an ergonomic, compact design, pilots can easily pack and fly on the go.

You can compare a maximum of 3 products